Wymondham Rugby Club enjoyed (nearly) their second clean sweep in a row in the Broadland Business Park Norfolk Youth Rugby Cup 2016, taking victory in age groups under 14, under 15 and under 16. North Walsham took the spoils in the under 13 age group.

Norfolk RFU president, Martin Crook, said: “The Broadland Business Park Norfolk Youth Rugby Cup is hotly contested every year and involves all of Norfolk’s youth rugby teams in age groups Under 13 to Under 16. It’s a great competition that embodies the spirit of rugby and is enjoyed by players, parents and supporters alike.

“In every age group, the finals were hotly contested with each team having come through tough matches against their counterparts at clubs throughout the county to make it to the finals.

“Praise must go to Wymondham for their success in three age groups and for being runners up in the fourth and congratulations to North Walsham on coming out on top at under 13 level. But it’s not just about the winners, this is a competition that is great for the sport of rugby and the rugby family throughout the county in all of Norfolk’s clubs. I’m really looking forward to next year’s competition.”

Broadland Business Park has been proud to sponsor Norfolk Youth Rugby for the last three years. 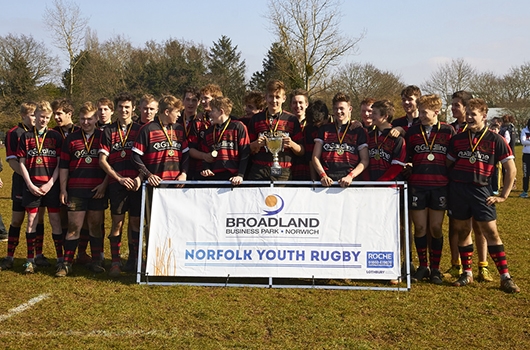