Norwich’s Broadland Business Park played host to a group of 18 children from the Chernobyl area of Belarus, the area devastated by the nuclear disaster in 1986, on Wednesday 16th July. The children enjoyed a barbecue and the hospitality of many of the businesses on the park as well as coming away with a whole range of gifts.

The children were in East Anglia for a four-week break and are aged from 7 to 10 years old. They come from the town of Bielaaziorsk in western Belarus, and surrounding villages. The visit is being arranged by the Mid Suffolk Link of Chernobyl Children’s Lifeline. The charity brings groups of children to the UK for respite holidays. All of these children are living in areas of Belarus still affected by the after effects of the Chernobyl disaster, even though it happened over 27 years ago.

They started their visit to Broadland Business Park, with a trip to Start-rite Shoes, where they selected shoes from the company’s outlet shop to take home before heading to fruit and vegetable merchants D & F McCarthy for a trip round the company’s extensive warehouse and a goodie bag of fresh produce.

D & F McCarthy laid on a barbecue, cooked by McCarthy staff, with burgers, rolls and sausages supplied by the Broadland Business Park branch of Makro. The barbecue itself was supplied by Broadland District Council. The children were given a ride in a truck, courtesy of Brand of Beccles, climbed aboard Seething Airfield’s fire engine and were given a guided tour of a Norfolk Police van!

Joanna Barnard, estate manager at Broadland Business Park, said: “It is fantastic how the businesses have come together to give these children a brilliant day out. It all started with Start-rite who have been supplying shoes to Chernobyl children for some years. To now turn their visit into an annual event is a great way to work together in aid of children who live a very challenging life.”

Stacey Wright, PR executive at Start-rite, said: “They are such delightful children who have a life that is unimaginably tough. We are so happy to be able to help them out. They are able, often for the first time, to get properly fitting, well made leather shoes, which we hope will last them for a long time.”

Martin McCarthy, director of D & F McCarthy added: “We are delighted to be involved with Chernobyl Children’s Lifeline. The charity does an amazing job for children who face an enormously tough life. It is humbling to meet the children and we are so pleased to give them an enjoyable few hours with us.

“It is gratifying that so many other people and companies are pitching in as well to make their visit to us a memorable occasion.”

Rob Evans, general manager of Makro on Broadland Business Park, said: “My team and I are delighted to be supporting the event again this year. It is hard to imagine just how tough life is for these children and their families, yet to see the joy on their faces as they enjoy unfamiliar surrounding and experiences is unbelievably moving.”

70% of the radiation fallout from the nuclear disaster in 1986 was focused on Belarus. 31 people died in the Chernobyl disaster and long-term effects such as cancers and deformities are still being accounted for. Models predict that by 2065 about 16,000 cases of thyroid cancer and 25,000 cases of other cancers may be expected due to radiation.

Elizabeth Parker is the Mid Suffolk Link chair of Chernobyl Children’s Lifeline. She said: “Although all of the children who come are not ill, they all have compromised immune systems as a result of the environment they live in. It is said that their four week visit here, breathing clean air and eating uncontaminated food, boosts their immune systems to such a degree that it can take two years to get back to the levels they arrive with.

“Despite many people trying to say that the radiation has gone, the fact is that it hasn't and the levels of radiation found in Belarus are way beyond that which would be tolerated in the Western world today. In the children's cancer hospital in Minsk, we are now seeing second generation children being born with cancer who live in so called "clean" areas. When I visited the hospital in April this year, we met children who were back for the second and third time having relapsed following treatment that was thought successful. The hospital is now also having to accept patients up to 30 years of age from the previous limit of 18 years old. It is heart-breaking”

As well as a great write up in the Eastern Daily Press, three of the children had the experience of a lifetime when they were interviewed in the studios of ITV Anglia. 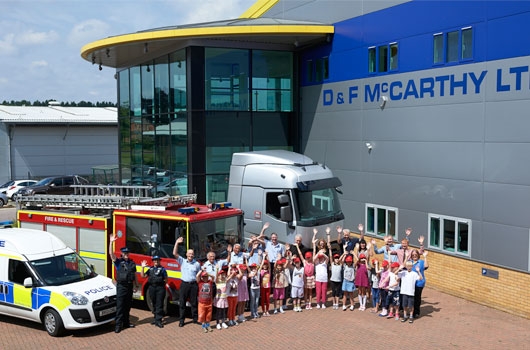