Joining the A47 westbound

1: Mismatched speed of joining traffic compared with fast A47 traffic. A 50mph limit on the A47 would reduce accident risk.

2: Two lanes of traffic coming down from the junction to join the A47. Risky manoeuvres, under-taking at speed, etc.

Response: This has been picked up and the two lanes are to be merged, with merge arrows, so that a single lane of traffic joins the main A47 westbound carriageway.

1: Would a dedicated left turn solve that problem?

Response: Yes, this is already being considered as a way of improving flow thought the junction.

2: Wouldn’t a link road between the new roundabout and the old roundabout simplify the junction?

Response: All these issues were thrashed out at the public inquiry. It’s already possible to go two ways – via the access roads, or via the two bridges.

Response: Still settling down, so may diminish. Removing queues across old bridge from roundabout may also help (see above).

Response: We will review signage.

Lack of footway along western side of Broadland Way

Many Aviva staff come from the park & ride car park on foot. Their safe journey time could be halved with a pavement along the west side of Broadland Way.

Response: We’ll look into this.

Is a rail halt being considered?

Postwick and NDR: Could staff briefings, say half an hour at lunchtime, be given at significant businesses

Response: Yes, we would be willing to do that.

NDR: Could more be done to reach people who don’t use social media or electronic comms?

Response: Yes, we’ve got another round of staffed exhibitions coming up and will be publicising these on the ground, as well as in e-media. We will be developing materials for making available at good local distribution points. Will investigate shops and supermarkets. 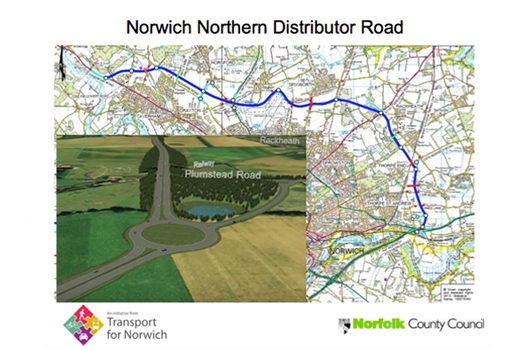